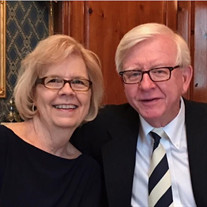 Urcle Wayne Elliott, 76, died December 21, 2021, with his family by his side. Wayne was born on March 21, 1945, in Portsmouth, Virginia to Hubert Urcle Elliott and Mattie Virginia Clark Elliott. Born of humble beginnings, he made it his goal from early on to make a good life for his family, and he did. He was a believer in the power of hard work and perseverance. Wayne was very involved in his community and worked to make it a better place. He served as President of the Montgomery, Blacksburg, Christiansburg Development Corporation, Christiansburg Chamber of Commerce and as vice president and president-elect of the Blacksburg Chamber of Commerce. He also helped create the Montgomery County Economic Development Commission and served as its first chairman for many years which was the first non-bank organization to receive funding of its kind to start the Corporate Research Center at Virginia Tech. He was involved with Rotary Clubs and Red Cross. Wayne’s involvement with these organizations was during his 20-year career in banking and his 35-year career as a realtor. His interests included family, local Civil War history, genealogy, and fishing and home remodeling. Wayne was predeceased by his parents and his brother, Robert Myles Elliott, in addition to his special aunt and uncle, Marshall and Carmen Smith. He is survived by his wife of 55 years, Doris Huff Elliott; his sister, Linda Akers (Doyle); his daughters, Sheri Altizer (Todd) and Carmen Recupero (Peter); also surviving are his special joys—grandchildren Jack Elliott Thompson, Jace Andrew Thompson, Reese Anne Altizer, Bowman Wayne Harris Altizer, and Ainsley Mae Altizer. Surviving Wayne as well are his brother-in-law Bob Huff (Doris Ellen); and sisters-in-law Betty Jones (Jay) and Kitty Byrd (Mike). A memorial service to honor Wayne’s life will be held at St. Paul United Methodist Church, Christiansburg, VA at 2:00 on Thursday, January 6, with visitation beginning at 12:30. Due to flu and covid concerns, masks are requested. For anyone wishing to further honor Wayne, the family would greatly appreciate a donation to St. Paul United Methodist Church at 220 West Main Street, Christiansburg, VA 24073 or to the NET Research Foundation, 31 St. James Avenue, Suite 365, Boston, MA 02116 for the Neuroendocrine Tumor Research Foundation.

Urcle Wayne Elliott, 76, died December 21, 2021, with his family by his side. Wayne was born on March 21, 1945, in Portsmouth, Virginia to Hubert Urcle Elliott and Mattie Virginia Clark Elliott. Born of humble beginnings, he made it his goal... View Obituary & Service Information

The family of Urcle Wayne Elliott created this Life Tributes page to make it easy to share your memories.

Send flowers to the Elliott family.