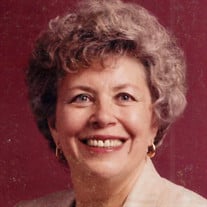 Trula Crawford Cumbo Tuck, A life well lived Trula was born on October 21, 1937 to Roy Crawford and Betty Cruise Crawford. Trula's parents owned Roy's Cash Store in Blacksburg, and they lived above the store until they sold it in the 1970's. Early in her life she decided "you had a choice in life, you can either wear out, or rust out" and she said she made the decision to "wear out." After graduating from Blacksburg High School, she left Blacksburg for New York to attend NYU. While attending NYU she met, fell in love with, and married William "Bill" Burton Cumbo. The couple left New York City for California, where they would have three children. In January of 1963, Bill Cumbo unexpectedly and suddenly died of what was believed to be a brain aneurysm. Trula, a widow with three children, returned to Blacksburg. In 1966 she fell in love and married Bill Tuck and they had two children. While seven months pregnant with her fourth child, she graduated from Virginia Tech. Trula and Bill made an incredible business team. Trula was a loving and supportive mother, a beloved wife, and one of the best human beings this world has ever known. Trula is survived by her husband of 54 years, David W. "Bill" Tuck, son Steven Cumbo and his wife Araceli, daughter Kendall Cumbo Blosser and her husband Michael, son Phillip Cumbo, son Christopher Tuck and his wife Susan, and son Craig Tuck and his wife Greta; and one brother John Crawford and his wife Kathy. She was blessed and loved by her 13 grandchildren and 4 great-grandchildren, and by family and friends too numerous to count, including her special friend and companion, Valerie Ramey, who became like a sister to her. Funeral services will be held Tuesday, August 10, 2021 at 11:00 a.m. in the McCoy Funeral Home Chapel. Burial will follow in the Westview Cemetery, Blacksburg. There will be no visitation. In lieu of flowers, donations may be made to the Blacksburg Rescue Squad.

Trula Crawford Cumbo Tuck, A life well lived Trula was born on October 21, 1937 to Roy Crawford and Betty Cruise Crawford. Trula's parents owned Roy's Cash Store in Blacksburg, and they lived above the store until they sold it in the 1970's.... View Obituary & Service Information

The family of Trula Crawford Cumbo Tuck created this Life Tributes page to make it easy to share your memories.

Send flowers to the Tuck family.