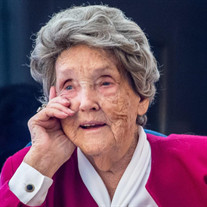 Thelma Thomas King, 97, of Blacksburg VA, passed away on November 25, 2019. She was born June 26, 1922 and was the daughter of Taylor Thomas and Myrtle Chewning Thomas. She was preceded in death by her beloved husband of 66 years, Howard King Jr.; brothers Lonnie, Herschel, Guy and Fred Thomas; sisters Eunice Thomas Sumner, Ruth Thomas Meador, Lottie Thomas Mayche; and daughter-in-law Deborah Warner King. She is survived by her brother Olen Ray Thomas; her children, son Howard III and his wife Linda, daughter Cynthia and her husband Michael Moorman, and son Mark and his husband Jonathan Lubin; seven grandchildren (Howard IV, Robert, Christopher, Mason, Madison, Harris, and Devlin); and seven great-grandchildren (Brendan, Zachary, Savannah, Christopher, Deborah, Alyssa, and Jonathan). Thelma was born in Trigg County KY, graduated from Trigg County High School, attended Andrew Jackson Business School in Nashville TN, and received a bachelor of science in elementary education from Peabody College (later Vanderbilt University) in 1947. Thelma settled in Nashville TN, teaching in the city’s public schools, and was active in Junior Women’s Club. While in Nashville, she met Howard King Jr. on a blind date, subsequently marrying him on April 7, 1950. She, along with her husband and son, Howard III, moved to Blacksburg VA in 1955 when Howard Jr. became the Director of Food Services at Virginia Tech. In Blacksburg, Thelma taught Sunday school at the Blacksburg United Methodist Church, and returned to teaching in public schools at Margaret Beeks Elementary School when it opened in 1963, retiring in 1987. She was a representative to the National Education Association, and a member of Alpha Delta Kappa. Thelma also devoted her time to the Blacksburg United Methodist Church, was a member of the Montgomery County Action board, and volunteered for the Interfaith Food Pantry. She was an avid bridge player. A graveside service, delayed a year by the pandemic, will be conducted at Westview Cemetery on Roanoke Street in Blacksburg at 10:30am on Saturday June 19, 2021, followed by a reception at the Blacksburg United Methodist Church. In lieu of flowers, the family suggests donations to either the Blacksburg United Methodist Church, or the Warm Hearth Foundation. Funeral arrangements are being handled by McCoy Funeral Home in Blacksburg.

Thelma Thomas King, 97, of Blacksburg VA, passed away on November 25, 2019. She was born June 26, 1922 and was the daughter of Taylor Thomas and Myrtle Chewning Thomas. She was preceded in death by her beloved husband of 66 years, Howard King... View Obituary & Service Information

The family of Thelma Thomas King created this Life Tributes page to make it easy to share your memories.

Thelma Thomas King, 97, of Blacksburg VA, passed away on November...

Send flowers to the King family.