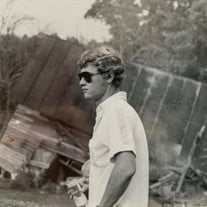 Teddy Dean Shepherd, 65, of Christiansburg, went home to be with his Heavenly Father on Monday, April 25th, 2022. He is preceded in death by his father, Garfield Shepherd. Left behind to cherish his memory and legacy are his former wife and mother of his children, Kim Hylton, sons, daughter and grandchildren: Josh Shepherd and girlfriend Sabrina Davis and their daughter Londyn Shepherd. Matt Shepherd, Kelli Linkous and their daughter Sophia Shepherd. Sarah Brockmeyer and husband Ryan Brockmeyer and their children Selah and Josie. Also cherishing his memory is his mother Ila Agee, brother Barry Shepherd and sister Mavis Reed. Those we love never truly leave us. There are things death cannot touch. All stories, even the ones we love, eventually come to an end. In telling the story of our father’s life, it’s impossible to separate the fact from the fiction, the man from the myth. But there are moments in his journey toward his uncertain destiny that are truly extraordinary. For the most part, it’s all too incredible to be believed. There comes a point when any reasonable man will swallow his pride and admit he made a mistake. That was not Teddy Shepherd, he was unapologetically authentic, blunt, unfiltered and honest. He was a rare soul so pure and refreshing in the fact he felt no need to “perform” for anyone. He always said “there is always going to be someone bigger and badder than you” but he feared no man. You will never influence the world by being like it and Teddy embodied that. Now we will go on embracing his spirit and who he was and how he helped shape who we’ve become. Teddy served our Country in the United States Air Force and will be honored in a graveside service at Sunset Cemetery in Christiansburg at 11am on Friday, April 29th. In lieu of flowers the Family requests donations be made to help cover funeral expenses made out to McCoy Funeral Home, 150 Country Club Drive SW, Blacksburg, VA 24060 with Teddy Shepherd in the memo. Arrangements are by McCoy Funeral Home Blacksburg , VA

Teddy Dean Shepherd, 65, of Christiansburg, went home to be with his Heavenly Father on Monday, April 25th, 2022. He is preceded in death by his father, Garfield Shepherd. Left behind to cherish his memory and legacy are his former wife and... View Obituary & Service Information

The family of Teddy Dean Shepherd created this Life Tributes page to make it easy to share your memories.

Teddy Dean Shepherd, 65, of Christiansburg, went home to be with...

Send flowers to the Shepherd family.