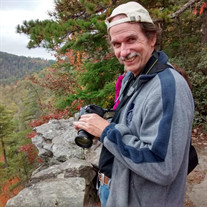 Stephen Robert Prince, age 65, of Blacksburg died, Wednesday, December 30, 2020. He is preceded in death by his mother, Jean Lummis Prince. He is survived by his father, Robert Emmett Prince, of Sykesville, MD., sister and brother-in-law, Cynthia... View Obituary & Service Information

The family of Stephen Robert Prince created this Life Tributes page to make it easy to share your memories.

Send flowers to the Prince family.