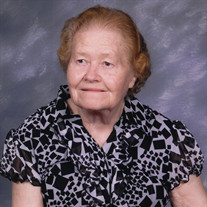 Ruth Craighead Cragett, age 90, of Christiansburg, died, Monday, January 17, 2022. She was born in Montgomery County, VA on May 25, 1931 to the late Arch M. and Amanda Kissinger Craighead. She was also preceded in death by her husband, David... View Obituary & Service Information

The family of Ruth Craighead Cragett created this Life Tributes page to make it easy to share your memories.

Send flowers to the Cragett family.