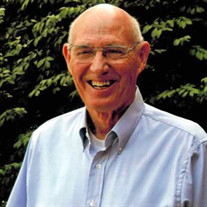 Robert Hollis Pusey, 85, of Blacksburg, VA, passed away on Saturday, April 4, 2020, from complication due to lung cancer. He was a loving husband, father, grandfather, and dear friend who will be missed by all who knew him. Bob, an only child, was born on August 1, 1934 and raised in Norfolk, VA. He was preceded in death by his father, Hollis Vandalia Pusey and mother, Marjorie Kornegay Pusey. Bob was also predeceased by his loving wife of 45 years, Betty Boyd Pusey, a home economics professor at Radford University. They were married on September 11, 1964. He is survived by his daughter, Elizabeth P. Brown and son-in-law, Michael W. Brown, and granddaughters, Haley and Delaney, of Virginia Beach, VA; his son, Robert Boyd Pusey, of Johnson City, TN; and twins, Brian Thomas Pusey, of Radford, VA and Eleanor Louise Pusey, of Little River, SC. A life-long Hokie, Bob graduated from Virginia Tech with a Bachelor’s Degree in Chemical Engineering in 1957. After completing his Master of Science degree in Chemical Engineering in July of 1958, he began his career as a “temporary” full-time educator at Virginia Tech, all the while working on research for his PhD in Chemical Engineering, which he received from the University in June of 1972. In January of 1963 his teaching appointment was made permanent and in 1965, he became Director of Virginia Tech’s Cooperative Engineering Program. In 1967, he transferred to the University's Extension Division and then returned to teaching at the College of Engineering in the summer of 1986. Bob retired as a professor with emeritus status on January 1, 2001. Of Bob’s numerous accomplishments, he considered his most significant recognitions being the Academic Advising Award in 1993 and charter membership in the Academy of Advising Excellence. A celebration of Bob’s life will be held at 2 pm on July 25, 2020 at the Blacksburg Church of Christ, 315 E. Eakin St., Blacksburg, Va. A live-stream broadcast will be available for viewing on the church’s website, http://bcoc.squarespace.com/. The family will be available for visitation after the service. In lieu of flowers, contributions may be made to the Blacksburg Church of Christ Youth Missions Program. The full obituary may be found online at www.mccoyfuneralhome.com.

Robert Hollis Pusey, 85, of Blacksburg, VA, passed away on Saturday, April 4, 2020, from complication due to lung cancer. He was a loving husband, father, grandfather, and dear friend who will be missed by all who knew him. Bob, an only child,... View Obituary & Service Information

The family of Robert "Bob" Hollis Pusey created this Life Tributes page to make it easy to share your memories.

Robert Hollis Pusey, 85, of Blacksburg, VA, passed away on Saturday,...

Send flowers to the Pusey family.