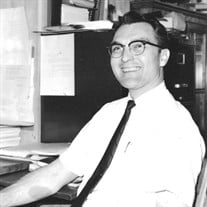 Not sure what to send?

Robert "Bob" Hayes Giles, Jr., of Blacksburg, Virginia, 88, seeing he was too ill to be of further service to his family and others, died bravely on May 5, 2022, from voluntarily stopping eating and drinking. He suffered from neurodegenerative... View Obituary & Service Information

The family of Robert Hayes Giles Jr. created this Life Tributes page to make it easy to share your memories.

Send flowers in honor of Robert.