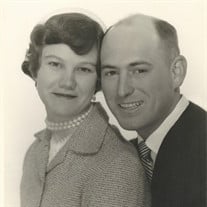 May 13, 1929 – June 3, 2020 Richard Harless Price, age 91, of Pembroke, VA went to be with his Lord and Savior on Wednesday, June 3, 2020. Richard was born in Blacksburg, VA on May 13, 1929 to the late Melvin Alexander and Mable Heavener Price. After graduating from Blacksburg High School, Richard enlisted in the United States Air Force where he served for four years and was a Korean War Veteran. After his military service, Richard attended Virginia Polytechnic and State University (VPI) where he received a Bachelor’s Degree in Animal Science. He worked on the college farm for over 30 years and continued to enjoy gardening and the outdoors after retirement. Richard was a devoted husband, father, grandfather, and great grandfather who built his family on strong Christian values. He was a long time member of St. Michaels Lutheran Church where he taught Sunday school for many years. Richard was preceded in death by his beloved wife of 45 years, Doris Moore Price, and granddaughter-in-law Nichole Christine Smith. He is survived by his daughter and son-in-law, Gennie and Jimmy Smith of Pembroke, VA, his sons and daughters-in-law Perry and Becky Price of Willis, VA, Michael and Amy Price of Brookneal, VA and James and Geri Price of Daleville, VA. His sister and brother -in-law Frances and Victor King, his brothers and sisters-in-law Kenneth and Joe Hunter Price and Allen and Louis Price. He is also survived by his eight grandchildren, Jimmy Smith (Kelly), Christina Martin (Perry), Caroline Jones (Jeremy), Mary Anne Price, Lee Price (Keya), Ben Price, Abby Poff (Austin), and Logan Price and his eight great grandchildren, Dabney and Della Martin, Conner, Weston, and Bryson Smith, Elizabeth Jones, Cayley Price and Ava Poff. The family will hold a graveside service on Friday, June 5th at 11:00 a.m. at the Westview Cemetery in Blacksburg, VA with the Rev. Monica Weber officiating. Arrangements by McCoy Funeral Home, Blacksburg.

The family of Richard Harless Price created this Life Tributes page to make it easy to share your memories.

Send flowers to the Price family.