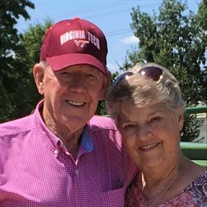 Raymond “Howard” Yates - born August 22, 1942 and Patricia Kirkner Yates - born December 17, 1944, of Pilot, VA went to be with their Lord on December 27, 2021. Howard and Pat were high school sweethearts and best friends. They were happily married for over 59 years. Howard was a U.S. Air Force veteran serving in Las Vegas, NV until returning to Pilot, VA in 1968. He worked for Burlington/New River Industries for 42 years. After retirement, Howard worked for MCPS as a beloved school bus driver. Pat worked many years for American Electric Power as a customer service representative. Upon retirement, she became an elderly caregiver for a short time. She was an active member in helping restore the Pilot Community Center. Howard and Pat were both members of Oak Grove Church. Howard served as deacon and song leader. Pat also was in the choir along with Howard. They both loved to sing for the Lord. They both were the kindest and sweetest people you could ever meet. Their love and support for each other and their family were tremendous. They are now walking down the streets of gold hand in hand and watching over their family. Howard was preceded in death by his parents, Maurice and Louise Yates; brother and sister-in-law, Roger and Darlene Yates. Pat was preceded in death by her parents, Hanford and Willadean Kirkner; brother-in-law, Raymond McNeil. Left to cherish their memories are their daughter, Elise Epperly and husband Jeff; and son, Randy Yates and wife Tara. They were blessed with 5 grandchildren; Matt Epperly (Nadia), Brady Epperly (Haley), Zach Epperly (Karlie), Hannah Yates and Breanna Yates; 4 great-grandchildren, Halen, Layton, Lincoln and Brantley; Howard’s sister, Clara Dove; Pat’s sister, Gloria McNeil (Bert Gill); Pat’s brother, David Kirkner (Doris); and many nieces, cousins and friends. At this time there will be no visitation but a memorial service will be scheduled at a later date. Arrangements by McCoy Funeral Home, Blacksburg.

The family of Raymond and Patricia Yates created this Life Tributes page to make it easy to share your memories.

Send flowers to the Yates family.