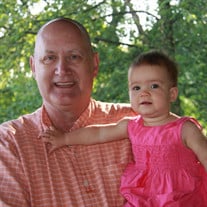 Michael Timothy Cromer, 73, was called home to our Lord on September 17, 2021 at Carilion New River Valley Medical Center. Tim was born on May 18, 1948 in Blacksburg, Virginia to John Houston Cromer and Louise Graves Cromer. Both parents preceded him in death. He grew up in Blacksburg, VA with siblings Carolyn Wimmer, Larry Cromer, Charlie Cromer, John Cromer, Barbara Cromer, Kathy Sage, and Stephen Cromer. Several siblings preceded Tim in death. He attended Blacksburg High School. Tim and his sons moved to Rocky Gap, Virginia. He worked for several companies before joining Frito Lay as a route salesman. Tim retired from Frito Lay as a distinguished employee after more than 30 year with their company. He was a loving son, brother, father, grandfather, and kind human being. He is survived by his sons, Tompall Cromer of Paso Robles, California, and Joseph Cromer of Christiansburg, Virginia; grandchildren, Jason Cromer of San Francisco, California, Kenneth Cromer of Prague, Czech Republic, Isabelle Cromer of Christiansburg, Virginia, Cecillia Cromer of Christiansburg, Virginia, Chance Cromer of Paso Robles, California, and Ellana Cromer of Christiansburg, Virginia. Tim was a character. He liked to tell stories and get into a good debate. Tim loved to sing bluegrass and gospel music. He lived his life with the utmost morals and values. Tim loved all children and they all knew him as Pawpaw or Granddaddy. A small graveside service will be held at Westview Cemetery in Blacksburg on September 26th at 2:00pm.

The family of Michael Timothy Cromer created this Life Tributes page to make it easy to share your memories.

Michael Timothy Cromer, 73, was called home to our Lord on September...

Send flowers to the Cromer family.