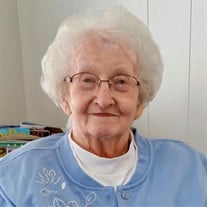 Mary Foster Taylor, 91, of Blacksburg, formerly of Newport, passed into eternity on Thursday, April 15, 2021 at Radford Health and Rehab Center in Radford, following a brief illness. She had been a resident there for several years. Mary Elizabeth was born January 27, 1930 the fifth of seven daughters to Thomas Foster and Anna Kate Foster Webb. She spent her early childhood in Craig County, then moved to Blacksburg before her junior year of high school. She was a 1947 Graduate of Blacksburg High School. She met her future husband, Harry Harvey Taylor while working in the Horticulture Department at VA Tech. He was the manager of the Sandwich Shop on the Tech Campus. In 1959 they moved to Newport to open a grocery store (Taylor’s General Store). While in Newport Mary was active in the community and their church. The Newport Woman’s Club; CWF at First Christian Church; WSCS & UMW at Newport-Mt.Olivet United Methodist Church; Many years of Flower Exhibits at the Newport Fair; She was also very active in Craig County Historical Society for many years. Mary was a great collector, antique glassware and Santa Claus figures were the most prominent. Many years she kept a fully decorated Christmas Tree somewhere in their home. She was also an employee of Leggett of Blacksburg & in the NRV Mall for over 25 years. Mary was preceded in death by her grandparents, her parents, her husband of 61 years, Harry; five sisters and five brothers-in-law. Virginia F. Smith and husband Howard; Frances F. Jones and husband Lyman; Norine F. Wills and husband Kenneth; Mae F. Helems and husband Eugene; Lucy Rebecca Foster; and A.R. Daniel, Jr.; her son-in-law J. Wyatt Sasser; a step-sister Zana Webb McCoy Albert and a step-brother Kelly Webb. Mary is survived by her son Richard Carlton Taylor and her daughter-in-law Paula Wood Taylor; daughter Nancy Taylor Sasser; and her son Craig Foster Taylor. Two very special granddaughters; Emily Paige Taylor and Adrienne Taylor Webb and her husband Joshua; five great-grandchildren; Mathew, Morgan & Macy Sowell; Jewel and Stella Webb. Mary is also survived by her younger sister Eva Foster Daniel of Swansboro, NC; a step-brother Willis Webb and wife Virginia of Christiansburg, VA and three sisters-in-law Lorraine Taylor of Bluffton, SC; Beverly Taylor of Christiansburg, VA and Lena Taylor of Mineral, VA and numerous nieces, nephews and cousins. The family would like to express their thanks to the doctors, physicians assistants, nurses and support staff at Radford Health and Rehab Center for their absolutely exceptional care of Mary and their kindness to our family. The family will receive friends on Sunday April 18, 2021 beginning at 2:00 pm. Her service will follow at 3:00 pm at the McCoy Funeral Home Chapel, 150 Country Club Drive, SW, Blacksburg, VA with Rev. Morris Fleischer, officiating. Burial will follow the service in the Newport Community Cemetery. In lieu of flowers, Memorial Gifts may be made to the Newport-Mt. Olivet United Methodist Church at P.O. Box 133 Newport, VA 24128 OR the Newport Emergency Fund % Perry Martin 728 Mountain Lake Road, Newport, VA 24128.

Mary Foster Taylor, 91, of Blacksburg, formerly of Newport, passed into eternity on Thursday, April 15, 2021 at Radford Health and Rehab Center in Radford, following a brief illness. She had been a resident there for several years. Mary Elizabeth... View Obituary & Service Information

The family of Mary Foster Taylor created this Life Tributes page to make it easy to share your memories.

Send flowers to the Taylor family.