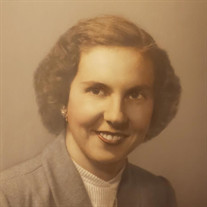 Mary Elizabeth Brooks Jeffries Wright (Mary J) was born August 31, 1932 in Essex County Virginia to Lewis and Netta Davis Brooks. She was the seventh of eight children. When her mother died in childbirth after the eighth child, at the age of three, Mary was taken in and later adopted by William and Irene Jeffries. One of her greatest joys was reuniting with her birth family when she was grown. She was so proud of all her siblings and the wonderful people they were. When Mary J graduated from the Smithdeal-Massey Business College in Richmond VA in the early 1950’s, one of her first jobs at the Edsel Ford Motor Company was short-lived because the flashy vehicles weren’t popular, didn’t sell well and the company closed. Mary and her husband, Shipley had two sweet red headed boys, Roland and Dennis. She doted on them and sacrificed to send both to Virginia Tech on her husband's bread man’s income. When the children were in elementary school, she and her lifelong friend, Myrtle Owens put together a Christian singing group with their combined children. Mary played the piano and they rehearsed the young singers. Their little group sang at their own and area churches for years. For decades, Mary J worked the voting polls in Richmond alongside her neighborhood co-worker, best- selling author, David Baldacci. Mary J served in several capacities at her home church, Shepherd’s United Methodist in King and Queen County VA. She was a pioneer in founding the JOY (Jesus, Others, You) service club in King & Queen County. This organization of community spirited ladies continue to do good works in the area for many years. She was preceded in death by her birth parents, Lewis and Netta Davis Brooks; adoptive parents, William and Irene Jeffries; Husband, Roland S Wright, Sr; Son, Dennis Ray Wright; brothers, Dr. George W. Brooks and wife Beryl; Henry Brooks, Alvin Brooks, Irvin and Florence Brooks, Floyd Brooks, Henly Brooks and sister Nell. She is survived by her son, Roland S Wright, Jr and wife, Mary H. Wright, Grandsons, Chris Wright and his wife, Mandy; Andrew Wright; great-grandsons, Austin and Aiden Wright, Sisters –in-law, Suzanne Brooks, Margaret Brooks and Virginia Brooks, many nieces and nephews; and special friends, Myrtle Owens; Jerry and Dee Dee Becker; Marie Collier and many church family members. Funeral services will be conducted Saturday, June 12, 2021 at 10:00 am in the First Church of God, Dublin with the Pastor Mike Hudson officiating. The family will receive friends from 9-10:00 am prior to the service at the church. Burial will be Sunday, June 13, 2021 at 2:00 pm at Shepherds United Methodist Church Cemetery, St. Stephens Church, Va. Arrangements by McCoy Funeral Home, Blacksburg.

Mary Elizabeth Brooks Jeffries Wright (Mary J) was born August 31, 1932 in Essex County Virginia to Lewis and Netta Davis Brooks. She was the seventh of eight children. When her mother died in childbirth after the eighth child, at the age of... View Obituary & Service Information

The family of Mary Elizabeth Brooks Jeffries Wright created this Life Tributes page to make it easy to share your memories.

Send flowers to the Wright family.