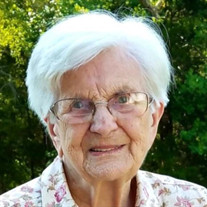 Lona Frances Watts Browning, age 94 passed away on April 2, 2022. Lona was born in Pyriton, AL on April 16, 1927 to the late William Jacob and Lola Mae Davis Watts. Lona was married to Lindy Browning for 69 years and was known as a traditional... View Obituary & Service Information

The family of Lona Frances Watts Browning created this Life Tributes page to make it easy to share your memories.

Send flowers to the Browning family.