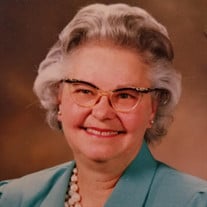 Lillian Haldeman “Peg” Moore went to be with the Lord on November 21, 2020. Peg was born in Moberly, Mo in 1929. She grew up on her father’s farm, and as a young girl, she honed her work ethic by helping take care of the farm chickens. She took music (piano) lessons in the summer and played in the school band. Her family moved to Tampa, Florida in 1944 where Peg graduated valedictorian of Plant High School. Peg studied zoology at Duke University, with an eye on attending medical school, and pledged Alpha Chi Omega sorority. She graduated from Duke University in 1951. She was then employed by the Center for Disease Control (CDC) in Atlanta, working various lab positions and learning bacteriology on the job, while working toward a professional rating taking night classes at the University of Georgia. Eventually she began working with Diagnostic Reagents which entailed making standard reagents for use by the State Health Departments. She graduated from Montana State University in Bozeman, Montana with a Ph.D. in 1964. After working for 15 years with the U.S. Public Health Service’s Communicable Disease Control Laboratory in Atlanta, Peg was employed by Virginia Polytechnic Institute (now Virginia Tech) in 1966, as a professor of bacteriology. She served as the associate director of the university’s Anaerobic Bacteriology Laboratory, and was an authority in the field of anaerobic bacteriology and food poisoning. Peg was awarded the title of University Distinguished Professor at Virginia Tech, for contributions to anaerobic bacteriology research worldwide. Peg was an active member of Christ Episcopal Church in Blacksburg, was an active member of Philanthropic Educational Organization (PEO), generous to the community, and is remembered by many friends and family members. She was preceded in death by her husband, W.E.C. Moore, of Blacksburg, VA. She is survived by three stepsons, Howard Moore of Stanardsville, VA, Jed Moore of Mesa, Arizona, and David Moore of Ft. Lauderdale, Florida, and their families. A memorial service will be held, at a later date, at Christ Episcopal Church of Blacksburg. Arrangements by McCoy Funeral Home, Blacksburg.

The family of Lillian Haldeman "Peg" Moore created this Life Tributes page to make it easy to share your memories.

Lillian Haldeman “Peg” Moore went to be with the Lord on November...

Send flowers to the Moore family.