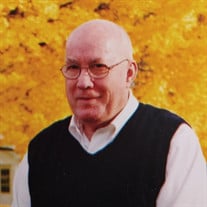 Lee Warren Johnson, age 82, of Blacksburg, Virginia died on February 14, 2021. He is remembered fondly by his wife of 57 years, Rochelle H. Johnson, by son and daughter-in-law Eric and Ali Johnson of Palmyra, Virginia, son and daughter-in-law Mark Johnson and Hannah Wittman of Vancouver, British Columbia, and by his four grandsons: Quinn and Casey of Palmyra, Virginia, and Noah and Eli Johnson of Vancouver, British Columbia. He is also survived by his brothers Mike of Lafayette, Louisiana, Gus of Slidell, Louisiana and Eric of Picayune, Mississippi. He was predeceased by his brother Paul, his sister Cathy, mother Violet and father Warren.  Lee was born in Appleton, Minnesota and graduated from Belle Chasse High School in Plaquemines Parish, Louisiana. In 1967, after completing his PhD at Michigan State, he and Rochelle moved to Blacksburg where he began teaching Mathematics at Virginia Tech. In retirement he and Rochelle spent many years creating memories together through extensive travel, spending quality time with family and friends and simply being with each other at home. He very much enjoyed his students, teaching, research and writing Mathematics books and he was a loyal Hokie to the end. His family will miss his kind and loving demeanor, his special sense of humor and the wisdom he bestowed. A memorial service will be held later this year. Arrangements by McCoy Funeral Home, Blacksburg.

The family of Lee Warren Johnson created this Life Tributes page to make it easy to share your memories.

Send flowers to the Johnson family.