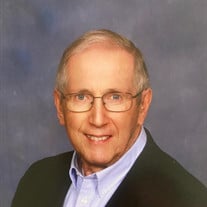 February 21, 1938 – April 19, 2022   Jerald Francis (Jerry) Robinson, Sr. passed away at home following a fight with kidney cancer.  He was preceded in death by his parents Arelia Elizabeth Jackson and Francis Byron Robinson.  Jerry leaves behind his wife of 61 years, Anne Catherine Ford Robinson (his college sweetheart) of Blacksburg, VA, his son, Jerald (Rob) Robinson, Jr. and spouse Amanda Lyvette Robinson and two grandchildren, Nigel Dalton Robinson and Roxanne Tara Robinson all of Roanoke, VA. In high school, Jerry was editor of Southside High School Newspaper, business manager of the yearbook, school photographer and voted “Mr. Southside”.  He was an Eagle Scout.  Jerry later graduated from what is now known as Rhodes College in three years with a degree in Economics.  He received a M.S. degree from Duke University and obtained his Ph. D.  from the University of Illinois. Jerry and Anne married in December of 1960.  His teaching career included Furman University, University of Missouri, and 37 years at Virginia Tech where he received teaching awards at both the undergraduate and graduate levels.  He was President of the Faculty Senate for two terms and chaired the committee to plan the curriculum at the University’s Steger European Studies Center in Switzerland where he taught for thirteen full sessions.  Jerry loved his students so much that he and Anne took groups on Study Abroad Trips for many years.  Jerry held honorary positions at several Chinese and European universities and received a Silver Medal from the University of Maribor Slovenia. In the local community, Jerry served 8 years at the Montgomery County School Board – two as chairman. He was a member and past President of Blacksburg Rotary Club. Jerry also helped found the “Fun 143 Trailer Ministry”, served on the boards of the Wesley Foundation, VT YMCA, Habitat for Humanity, and served as chair of the Board of the Interfaith Food Pantry.  Jerry certainly lived by a motto of Rotary, “Service Above Self”. Saturday mornings were always set aside for his donut and coffee group.  These guys were to him the brothers he never had as an only child. Jerry was a longtime active member of Blacksburg United Methodist Church where a memorial service will be held on Tuesday, April 26 at 2:00 p.m.   Visitation and reception will follow in the Whisner Hall.  Interment of Jerry’s cremains will be at a later date. In lieu of flowers, donations may be made to the Carilion Clinic Hospice NRV (701 Randolph St. Suite 10, Radford, VA 24141) or to the Blacksburg Interfaith Food Pantry (P.O. Box 11382 Blacksburg, VA 24062) or to the Pamplin College of Business (Management Department) at VT (800 West Campus Dr. Mail Code 0233, Blacksburg, VA 24061).

The family of Jerald Francis Robinson created this Life Tributes page to make it easy to share your memories.

Send flowers to the Robinson family.