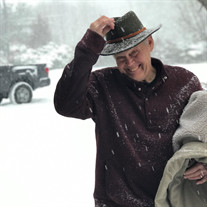 James Stade, age 72, of Blacksburg, Virginia died May 30, 2021. Jim was born in Chicago, IL on February 12, 1949 to the late John and June Stade. He was a carpenter, teacher, preacher, newspaper delivery man, and loved people with a whole heart. He was a son, brother, cousin, husband, father, uncle, and affectionately known as “Grumpy” to his grandchildren. He grew up in Fort Lauderdale, FL. He attended Concordia Teachers College in River Forest, IL, and Reformed Theological Seminary in Jackson, MS. He worked long and hard. He learned carpentry from his father, and then became a minister in churches from Alabama to Ontario, Canada, and finally in Virginia and West Virginia. He delivered the Roanoke Times for more than 16 years, making friends with fellow delivery people and customers, all before his day jobs. He was an avid newspaper subscriber and reader. He also supported his family by working in construction and home renovation. He taught in several schools. He ministered in five churches beginning in 1988. He was humble, and preferred the underdog in every situation. He loved Jesus, and practiced an open, inclusive Christ-like faith. He was quick to recite John 3:16. He was known for simple acts of kindness and care, from mowing his neighbors’ lawns, to leaving surprise Carol Lee Donuts on many a front porch. He made his grandchildren laugh easily. He was sustained by friendships with the community members he encountered every day - from church, to the grocery store, to the county waste site. He loved animals, and welcomed dogs, cats, and other adopted creatures into his home over the years, including Heidi the cat who curled up beside him until the end. Jim treasured his family through his entire life and despite distances. He carried them in his heart. He loved his remarkable wife of 43 years, Sue, the most. He is remembered for boisterous displays of affection for her such as shouting, “My Lover!” as she walked in the door from work. He liked to compare sunrises to sunsets with her every day. He could dabble beautifully on the piano and the harmonica. In the last few years, he sent quirky, daily text messages of “…love…!” to his family and friends on his flip phone. He doubtlessly looked forward to seeing his beloved parents again. He is survived by his wife Sue Stade, of Blacksburg; brother JT and sister-in-law Marion Stade; son Trevor and daughter-in-law Jessica Stade; daughters Chrystie, Natalie, Laura, and sons-in-law Scott Greges and Kahlil Detrich; and grandchildren Isla and Avery Stade, Claire Greges, and Roan and Starlie Detrich. A private ceremony with family will take place at home per Jim’s wishes. In lieu of flowers, memorial contributions may be made to the Rescue Mission of Roanoke. He had a peaceful ending, surrounded by his family at home. His characteristic expressions of love will be missed, to say the least. In his final days when asked for life advice, Jim simply replied, “Keep going.”

James Stade, age 72, of Blacksburg, Virginia died May 30, 2021. Jim was born in Chicago, IL on February 12, 1949 to the late John and June Stade. He was a carpenter, teacher, preacher, newspaper delivery man, and loved people with a whole heart.... View Obituary & Service Information

The family of James Stade created this Life Tributes page to make it easy to share your memories.

Send flowers to the Stade family.