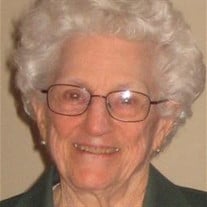 Dr. Helen Pilcher Hall, 99, passed away on 31 December 2019 at the Showalter Center in Blacksburg, Virginia. Helen Leona Pilcher was born on February 17, 1920 in Gridley, Kansas to Clinton E. Pilcher and Blanche A. (Beatty) Pilcher. Helen grew up in Gridley and graduated from Gridley Rural High School in 1937. After high school she attended Kansas State University, graduating in 1941 with a Bachelor of Science in Home Economics. After college, Helen worked as a dietitian in hospitals at the University of Michigan (1942-45) and Cook County, Illinois (1945-47). In 1947 she returned to graduate school at Cornell University where she earned a Master of Nutrition Science degree in 1949 and her PhD in Biochemistry and Nutrition in 1953. Dr. Hall was an Associate Professor at the University of Minnesota School of Home Economics from 1953 to 1957. While serving on an all-campus committee, Helen met Otis Hall. They were married in December 1957 and moved to Lafayette, Indiana where she was an Assistant Professor at Purdue University. After the birth of her daughter, Barbara, in 1960, Helen balanced home and profession that included teaching at the University of New Hampshire from 1968 to 1974. She and Otis moved to Blacksburg in 1974, where she was an Instructor, coordinating dietetic internships for students in the Roanoke and New River Valleys, in the Virginia Tech (VPI&SU) College of Home Economics, until retiring in the early 1980s. After retirement, Helen and Otis traveled extensively and researched family genealogy. Helen was a member of Blacksburg United Methodist Church and the Alleghany Chapter of Daughters of the American Revolution. She enjoyed music, sewing, knitting, cooking, playing bridge, and took at least one long walk every day. Helen was preceded in death by her parents, her brother, Imon B. Pilcher, her sister, Izetta F. Cummins, and her husband, Otis F. Hall. Helen is survived by her daughter, Barbara L. Hall (John Eicholtz) of Murray, Utah, step-son, Geoffrey (Lisa) Benedict-Hall of Reston, Virginia, and step-daughter, Elizabeth (Jerry) Lubin of San Pedro, California. She has five grandchildren, nine great-grandchildren, and several granddogs and cats. A memorial service will be held at the Karr Center in Warm Hearth Village in Blacksburg at 4:00 p.m. on Saturday 4 January 2020. A private interment will be held in Oberlin, Ohio at a later date. In lieu of flowers the family requests memorial donations be made to your local animal shelter or the Humane Society of Montgomery County, http://www.hsmcshelter.com/donations.html.

The family of Dr. Helen Pilcher Hall created this Life Tributes page to make it easy to share your memories.