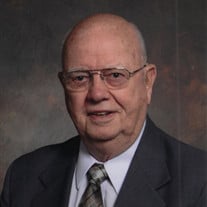 George Winfred Hawkins, 95, of Blacksburg died Wednesday, March 23 after a brief illness. He was born in Stokes Co., NC on February 17, 1927 to the late Sam Frank Hawkins and Annie Lane Highfil Hawkins. He grew up in Rockingham, NC. At the age of 18, he enlisted in the U.S. Navy and was part of the commissioning crew on the USS Dogfish from 1945-47. He earned his BS degree in Agronomy from North Carolina State University in 1952. He completed his Master’s degree in Soil Science at North Carolina State University in 1956. He received his PhD from Iowa State University in 1963. After 27 years of service as Professor of Agronomy and Extension Agronomist, Soil Fertility at Virginia Polytechnic Institute and State University, he retired in 1989 as Professor Emeritus. Later he worked part time as President of Specialist Farm Management Service of Blacksburg and as a private consultant for Southern States. His love of sharing knowledge and stories with the county agents and the farming community of Virginia was known throughout the state. He was a member for 60 years at Blacksburg Baptist Church and gave of his time and talents such as teaching Sunday school, coordinating Senior Adult programs, and serving as a Deacon. He was always ready to help in any capacity where he was needed from the church kitchen serving Saturday breakfasts to serving on numerous committees. He will be remembered for his steadfast belief in his Lord and Savior and wanting to share that love with others. He was active in his community through many years of service with NARFE ( National Active and Retired Federal Employees Assoc.); his beloved ROMEOS (Retired Old Men Eating Out) and many other outreach groups. He was honored to receive the Gunnar Teilman Award Lay Person of the Year from the Montgomery Co. Blacksburg Kiwanis Club in 1997. George was preceded in death by his loving and devoted wife of 63 years, Clara A. Hawkins. He is survived by his daughter, Anne Faris of Blacksburg; sons and daughters-in-law, Gregg W. and Crystal Hawkins of Apex, NC; Michael D. and Cecilia Hawkins of Broadway, VA; grandchildren, Jonathan (Stephanie) Faris, Jeremy (Janell) Faris, Kate (Fernando) Ramirez, Allison (Wes) May, Grayson Hawkins, Camden Hawkins, Gerek Hawkins; great grandchildren, Samantha Faris, Madeline, George, and Hazel Faris, Santiago and Lucas Ramirez, Alexis and Olivia Fitzwater and Eva May. He is survived by brothers, Francis (Linda) Hawkins, Bryon Hawkins, and sister, Jen Stutts and numerous nieces and nephews. Funeral service will be conducted Saturday, April 2, 2022 at 3:00 pm in the Blacksburg Baptist Church with Dr. Tommy McDearis, the Rev. Todd Millsaps and Dr. Don McKinney officiating. Interment will follow in the Westview Cemetery. Family will receive friends from 6-8:00 pm Friday evening at McCoy Funeral Home, 150 Country Club Dr. SW, Blacksburg. Donations may be made to Blacksburg Baptist Church Land of Promise Fund, 550 N. Main St., Blacksburg, Va. 24060. Arrangements by McCoy Funeral Home, Blacksburg.

George Winfred Hawkins, 95, of Blacksburg died Wednesday, March 23 after a brief illness. He was born in Stokes Co., NC on February 17, 1927 to the late Sam Frank Hawkins and Annie Lane Highfil Hawkins. He grew up in Rockingham, NC. At the age... View Obituary & Service Information

The family of George Winfred Hawkins created this Life Tributes page to make it easy to share your memories.

Send flowers to the Hawkins family.