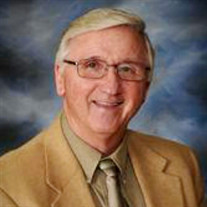 Gary Douglas Creed of Shawsville, Virginia was set free from a valiant battle with Alzheimers Disease as the snow fell to the ground on January 28, 2021. Gary, the son of Melvin Lewis and Ada Mae Moore Creed, will be remembered by his family, friends and all who knew him as a man who proudly served his community, sang in his church choir, and cherished his family. There was close to nothing Gary wouldn't do for his family. If there was ever something his family wanted or needed, he made sure to make it happen. Nothing was impossible when he was on your side.  Success wasn’t handed to Gary. He believed, and passed on the idea that, if you wanted to be the best, you would have to work harder and longer than everyone else; a trait that his family will carry on in his honor. Gary was employed at Shelor Motor Mile for many years, and also served on the Montgomery County Board of Supervisors for 15 years. Gary had a passion for basketball and enjoyed watching the game, as well as coaching. His advice on the court transferred to real life advice as those who received it grew into adults. Gary would encourage his players to, “Take the shot if you’re open. You’ll miss 100% of the shots you don’t take”. Gary encouraged friends and family to take chances when opportunities presented themselves. Gary wasn’t afraid to take chances and had the ability to create something positive out of a situation that was difficult for others to find the light in. Lastly, Gary will be remembered for his willingness to stand up for what he believed in. He never let the opinion of others sway him from his beliefs and what he thought was right. His community, and giving back was so important to him; as well as the success of the younger generation within the community.   Gary is preceded in death by Brothers, Lewis Creed, John B. Creed; Sisters, Mary Huff, Geraldine Carden, and Lorene Brammer.  Gary is survived by his wife, Linda Creed; Son, Tim Creed and wife Barbara; Daughter, Niki Shumate and husband John; Brothers, Wilford Creed and Clyde Creed; Sister, Elizabeth Brammer ; Granddaughters, Bridgette Bradley and husband James, Karalee Boggess and husband Mark, and Karli and Lauryn Shumate; Great-grandchildren Jaxon, Jacob, Holt, Boone and Allie. There will be a private service for immediate family. Due to Covid, the family will have a memorial service in the spring. In lieu of flowers, the family asks that you hug your child, call an old friend, or teach a child to fish. Time waits for no one.  McCoy Funeral Home in Blacksburg, Virginia is caring for the Creed family.

Gary Douglas Creed of Shawsville, Virginia was set free from a valiant battle with Alzheimers Disease as the snow fell to the ground on January 28, 2021. Gary, the son of Melvin Lewis and Ada Mae Moore Creed, will be remembered by his family,... View Obituary & Service Information

The family of Gary Douglas Creed created this Life Tributes page to make it easy to share your memories.

Gary Douglas Creed of Shawsville, Virginia was set free from...

Send flowers to the Creed family.