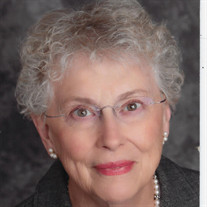 Russell, Frances Hutcheson age 90 of Blacksburg, passed away peacefully on November 22, 2021. Frances was the oldest of the three children of Mac and Eleanor McEver and was born in the heart of downtown Blacksburg in 1931. She was a devoted daughter and sister, taking care of her parents and younger brother Buddy as they aged. She graduated from Westhampton College and returned to Blacksburg to teach English (she was a lifelong grammarian!) where she met and married Thomas B. Hutcheson, Jr. They began their life together in Raleigh, NC where Tom earned his Ph.D., then moved to Lexington, Kentucky where their three children were born. Returning to Blacksburg in 1964, Frances was a dedicated servant not only of her family but of her community. She loved history and served as a docent at Historic Smithfield Plantation, helped organize the Smithfield Foundation and served on the Board of Directors of the APVA. Over the years she was a Girl Scout Leader, Vacation Bible School Director, and Chair of the Sunday School at the Blacksburg Presbyterian Church which she joined as a child and attended her whole life. She was a Rotarian, Paul Harris Fellow, and a Kentucky Colonel. After Tom’s death, she married Dr. George E. “Buddy” Russell and spent the remaining years of her life with him, celebrating their 35th anniversary just a week before her death. She was a tremendous help to her husband in his efforts to involve the alumni of Virginia Tech in their alma mater. Together they traveled the country and world, but her favorite times were spent with her family, especially at Claytor Lake. She found great peace gazing over the water there and swimming in it. She had her father’s smile and spread it to others who were blessed to be in her presence. She taught her children to love God and spread his light on Earth. Hers was a life well-lived. She is preceded in death by her parents, Herbert M. “Mac” McEver and Eleanor S. McEver; brothers Buddy and Bill McEver; and first husband Thomas B. Hutcheson, Jr. She is survived by her husband George E. “Buddy” Russell; sister-in-law Vicki McEver; children Elizabeth Domico, Tom Hutcheson (Beth), Joel Hutcheson (Kelly), Mike Russell (Chevella), Cindy Mason (Chip), and Jeff Russell; grandchildren Patrick Domico (Lucy), Adam Domico (Margot), Tommy Hutcheson (Paige), Henry Hutcheson, Mac Hutcheson, John Hutcheson, Eleanor Hutcheson, Thomas Hutcheson, Emma Van Stone, Allie Van Stone, Katie Russell, Holly Mason, and Christopher Mason; and nephew Mark McEver (Brenda). Interment of her ashes will take place on April 9, 2022 at 10 a.m. at Westview Cemetery followed by a celebration of her life and reception at Blacksburg Presbyterian Church at 11 a.m. In lieu of flowers, please make donations to the Blacksburg Presbyterian Church (blacksburgpres.org) or The Smithfield-Preston Foundation (historicsmithfield.org) Arrangements By McCoy Funeral Home, Blacksburg.

Russell, Frances Hutcheson age 90 of Blacksburg, passed away peacefully on November 22, 2021. Frances was the oldest of the three children of Mac and Eleanor McEver and was born in the heart of downtown Blacksburg in 1931. She was a devoted... View Obituary & Service Information

The family of Frances Hutcheson Russell created this Life Tributes page to make it easy to share your memories.

Send flowers to the Russell family.