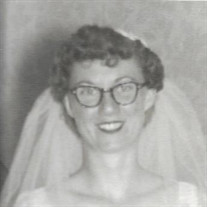 Frances Cochran passed away on November 28, 2021. She was ninety-four years old. Born in Blacksburg in 1927 to Anna Bowles and Army Sergeant Birman Craig, she was the only child of a poor family, but food was always on the table, she was loved,... View Obituary & Service Information

The family of Frances Cochran created this Life Tributes page to make it easy to share your memories.

Send flowers to the Cochran family.