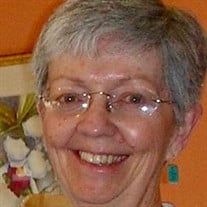 Elizabeth (Libby) Cure Calvera, 78, educator and resident of Blacksburg, VA died May 20, 2020, at Lewis Gale Montgomery of a stroke. Libby is predeceased by her parents, Elizabeth Ritter and M. Daniel Cure, her husband, Jordi, and two brothers, Paul and Thomas.  She is survived by her eldest brother, Daniel Cure, and wife Isabel Lehman, Santiago, Chile; nieces Jeanne Cure, Falls Church, Virginia; Kelly Cure, Triangle, Virginia; and nephew, Jordi Calavera (Montserrat), Barcelona, Spain.  Born in Biloxi, Mississippi, Libby grew up in El Salvador where her father was a civil engineer and manager of the Salvadoran branch of a U.S. owned railroad. She was proud of her family’s longstanding roots in Latin America beginning with maternal great grandparents from Boston who eloped in the 1880s just before crossing Texas into Mexico where he had taken a job as accountant for a Mexican-American railroad. Libby’s grandmother grew up in Mexico and Costa Rica where, in 1912, she married a German accountant from Hamburg whose family ran an export-import business in Costa Rica. Her grandfather left the family business and went to work for the United Fruit Company which sent them to Panama (where Libby’s mother was born), Colombia, Cuba, Honduras (where her two uncles were born), and Guatemala (where Libby’s mother met her West Virginia-born father, who had been hired in 1928 by the United Fruit Company’s railroad division to work in Honduras before being sent to Guatemala). They married in New Orleans, Louisiana, returning to Guatemala where Libby’s two older brothers, Dan and Paul, were born.  At the outbreak of WWII, the family left Central America, moved to Mississippi where Libby’s father was unable to enlist in the Army (reason: flat feet!).  Libby and her brother Tom were born there. By 1945, the family moved to El Salvador. Her father had accepted a job for the same railroad, which by then had separated from the United Fruit Company. Ten uninterrupted years in San Salvador were enough to give Libby an enduring interest in El Salvador in particular and Latin American in general. By the time her father retired from the railroad, he had lived in Central America 45 years. Eventually, Libby and her brothers attended public high school in her father’s hometown of Weston, West Virginia.  Libby graduated with a B.A. from Carnegie Tech (now Carnegie Mellon), studied for an MA in Latin American Area Studies at Georgetown U., and in 1964 went to do community development work in a slum in Caracas, Venezuela. In Caracas she met her husband-to-be, Jordi Calvera, who had left Barcelona, Spain in 1955 looking for a better life. After fulfilling her contract working in the slums, Libby landed a job as teacher and principal of a American-Venezuelan elementary school.  A few years later she accepted a job teaching English at the Universidad Simón Bolívar.  Libby and Jordi moved to Blacksburg in 1979-80 where he became a successful landscape artist and she enjoyed teaching Spanish at Virginia Tech until she retired in 2013. Three years later, Jordi died. In retirement, Libby enjoyed helping others, taking fitness classes at the Blacksburg Community Center and the Lifelong Learning Institute, having her mind stretched by members of her book group and the Aging Solo group as well as laughing, joking and being around friends. She continued to cook, bake, and share the results with friends and neighbors. At Libby’s request, there will be no memorial service. She will be cremated.  Condolences in English or Spanish can be sent to her brother. E-mail at [email protected] or regular mail (international postage) at Daniel Cure, El Taihuen 12501, Edif. 2 Depto. 54, Lo Barnechea, Santiago, Chile 7691237.

The family of Elizabeth (Libby) Cure Calvera created this Life Tributes page to make it easy to share your memories.

Send flowers to the Calvera family.