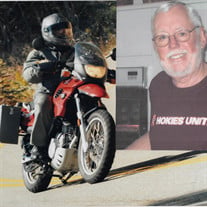 Longtime Blacksburg resident, Edwin Pierson Felch III, died December 1st, 2020 at the age of 82.Pierce was born January 24th, 1938 in Chatham N.J. to Edwin Pierson Felch Jr. and Roberta Lee Felch and lived there until he completed High School. He attended Dartmouth College and earned a BA in 1960. Following Dartmouth, Pierce enlisted in the Navy and served in Coronado California, as well as Yokosuka, Japan and ultimately earned the rank of Lieutenant Commander. He earned his Juris Doctor at the John Marshall Law School in Illinois, and graduated at the top of his class in 1972. Pierce had a distinguished career at AT&T Bell Laboratories in various states and retired in 1989 as Director of Facilities Management. In 1991 decided to make his new home in Blacksburg, Virginia to enjoy his retirement years. Pierce was married to his loving wife Nancy for 52 years. He was an avid motorcycle enthusiast and enjoyed driving anything with wheels. Over time, Pierce owned close to 100 different types of motorcycles and loved buying and selling them. In retirement, he worked at Blacksburg Transit driving a bus for 10 years and often times competed in their bus rodeos. He also volunteered at the Lewis Gale Montgomery Hospital for a number of years. Pierce enjoyed country music, meeting his fellow bikers for breakfast in different locations on Saturdays, traveling, reading, and could literally fix anything. Surviving family includes his wife Nancy, son and daughter-in-law Christopher and Michelle, grandchildren AnnMarie, Morgan, Haven and Ella, as well as a number of cousins. He is preceded in death by his parents, and his twin sisters Susan and Nina A special thanks to the care givers within the memory care unit at Kroontje Health Care Center at Warm Hearth who tirelessly and compassionately assisted him in his last three years of life. As per his wishes, no formal services will be held. In lieu of flowers, those who wish to honor his memory are invited to make a donation to the Warm Hearth Foundation (www.retire.org), the Humane Society of Montgomery County (www.hsmcshelter.com), or the charity of their choice.

The family of Edwin Pierson Felch III created this Life Tributes page to make it easy to share your memories.

Send flowers to the Felch family.