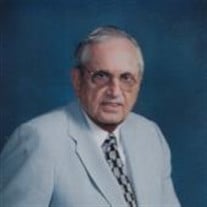 Edward Benton Hale of Blacksburg. passed away at his home Friday April 24, 2020. He was 97 years old. "Ed" or as family affectionately referred to him as "Benton", was born in Narrows, Virginia on Dec 4, 1922. Living the first sixteen years of his life on the D.F. Hale Farm in the small southwestern Virginia town, Benton graduated from Narrows High School in 1939 and enrolled at Virginia Polytechnic institute and Agricultural and Mechanical College. As a member of the ROTC, Benton completed his undergraduate work from "Virginia Tech" in 1943 earning a degree in Agricultural Engineering. Soon after ,Benton quickly entered World War II as a member of the US Army's Quartermaster Corp with a rank of Staff Sergeant. His tour began in the Pacific Theatre where his involvement led him into the invasion of the Philippines, the Battle of Luzon and the Battle for Manila ending his service as part of the Occupational Forces in Japan. Returning home from the war in 1946, he began working for Appalachian Power Company in Pulaski, Virginia serving the peoples electrical needs until 1950. During this time, he met the love of his life, Alice Russell Scott. They were married in Pulaski in the summer of '47 and bore their first child in 1948, Edward Benton Hale, Jr. at Radford Hospital. In 1950 he moved the family to Nashville, Tennessee where he would spend the next three years working for the University of Tennessee-Nashville as an Extension Agent. His work consisted of many facets including radio appearances on a morning farm report show hosted by Hank Snow and Roy Acuff. While in Nashville, their second child was born, Elizabeth Scott Hale at Vanderbilt Hospital. In 1953 the family of four moved to Knoxville, Tennessee where Benton served on the Faculty at UT-Knoxville until 1960. Here, he earned his Masters Degree in Ag Engineering establishing himself as a true "Big Orange" supporter. His season football tickets were on the 50 yard line, 44 rows up! In 1957, the third and last child was born, John Franklin Hale near the UT campus. As fate would have it, Benton would return to his alma mater, Virginia Tech, serving as an Associate Professor and Irrigation Specialist for the Extension Service. He remained with the university until his retirement in 1982. Benton remained active in the community serving on the boards of The Blacksburg United Methodist Church and the Soil and Water Conservation Society. He was a proud member of Rotary International (Blacksburg-Christiansburg Chapter) obtaining a Paul Harris Fellowship. He was an active member of ASAE, Intermont Masonic Lodge in Narrows, American Legion and 4-H, He supported organizations such as Easterseals, Special Olympics, March of Dimes, American Heart Association, Feeding America and PBS. He loved fishing, golfing, hunting, traveling and playing Bridge. Benton was an avid Va Tech Hokie! He had season tickets for football and basketball taking him from Miles Stadium to Lane Stadium and the War Memorial Gym to Cassell Coliseum. Most of all he loved his family. His family devotion and his community spirit will never be forgotten. He was the epitome of the Virginia Tech slogan, Ut Prosim "That I may serve" We would like to thank the all the folks at Good Samaritan Hospice and Home Instead Senior Care for the care of Benton. The staff of both organizations are to be commended for their efforts. A special thanks goes to Doug Steger (nephew), Betty McQuillar (friend of the family), Michael, Stephanie and Doris Sheppard for their participation; Terry Hash, Brooke Priest, Miranda and Tammy of Good Samaritan and Virginia Lucas, Misty Lutz, Seth Brown and Cristy McAvoy from Home Instead. Benton leaves behind two sons Edward Benton Hale, Jr and John Franklin Hale of Blacksburg; daughter Elizabeth Hale Cohen of Christiansburg; grandson Brandon Cohen of Smyrna, Ga and grandson Chad Cohen, his wife Kem Cohen and their children Davis and Caroline of Woodstock, Ga. Numerous nieces, nephews and cousins including the following: Steve and Terri Smith of Half Moon Bay, Calif; Jennings Smith of Missoula, MT; Doug Steger and Sally Steger of Pulaski, Va; Watts and Linda Steger of Buchanan, Va; Joe and Jeannie Scott of Rehobath Beach, Del; Alan and Liz Scott of Oak Park, Calif.; Bill and Sandy Scott of Vero Beach, Fla; Pamela Roberts of Tampa, Fla; Cousins; Connie Smith of Narrows, Va. ;Byron Hale of Clinton,Tn and Barbara Hale of Narrows,Va.. He was preceded in death by his wife Alice, parents Dan and Leona Hale and sister Katherine Hale Smith and her husband Robert. A graveside service is planned for Tuesday April 28 at the Memorial Gardens of the New River Valley in Blacksburg at 2pm. In lieu of flowers, please send contributions to the Blacksburg Rescue Squad 1300 Progress St. NW Blacksburg, Va. 24060. Arrangements by McCoy Funeral Home, Blacksburg. Friday, April 24, 2020

Edward Benton Hale of Blacksburg. passed away at his home Friday April 24, 2020. He was 97 years old. "Ed" or as family affectionately referred to him as "Benton", was born in Narrows, Virginia on Dec 4, 1922. Living the first sixteen years... View Obituary & Service Information

The family of Edward Benton Hale created this Life Tributes page to make it easy to share your memories.

Edward Benton Hale of Blacksburg. passed away at his home Friday...

Send flowers to the Hale family.