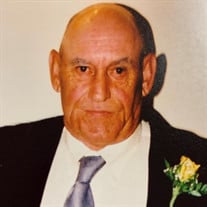 Edward Ribble (Bill) Davis, Jr., 89, of Blacksburg died on December 6, 2021. One of ten children, Bill was born September 15, 1932 to the late Edward Ribble (Buck) Davis, Sr. and the late Gillie Hughes Davis. Married February 3, 1953, Bill was predeceased by his wife of 57 years, Helen Frances Stanger Davis. Bill is survived by his four children, Charlene (Mike) Crews, Steve (Melissa) Davis, Ron (Diane) Davis and Gary (Sally) Davis. Also, he is survived by his grandchildren, Jennifer (Ronnie) Jones, Lindsay (Jonathan) Salmons, Ryan (Caitlin) Johnson, Kelly Davis Weaver (fiancé Cody), Cody Davis, Cory Davis (fiancé Meghan), Kayla Johnson and Carter Davis as well as great-grandchildren Alexis Jones, Grace Jones, Addison Jones, Jacob Jones, Avery Weaver and Charlotte Weaver. In addition, Bill is survived by sisters-in-law Jean Davis and Betty Simpkins and brother-in-law George (Katie) Stanger, special companion Ruby Dove as well as numerous nieces, nephews, cousins and friends. Bill served active duty in the U. S. Army from 1953 until 1955 and the U.S. Army Reserves until he received an honorable discharge in 1961. While stationed in France in 1954, he participated on a championship basketball team and enjoyed being a member of the baseball team. Upon completion of active duty in the U.S. Army, he returned to Blacksburg High School to earn a high school diploma. Quite an accomplishment for a man in his twenties with a wife and children to support. After receiving his high school diploma, Bill enrolled in West Virginia Business College to study accounting. Always being an athlete, as a young man Bill played baseball for local teams on weekends, often bringing Frances and the kids to cheer him on. Later in life, his passion for sports turned to playing golf with friends and family. However, his greatest joy was to support the athletic endeavors of his sons and later his grandchildren. In addition, throughout his life he followed the VA Tech, Blacksburg High School and Radford High School athletic programs. Bill enjoyed camping, hunting – especially deer hunting, fishing and gardening. Everyone admired his ability to grow beautiful vegetables, especially his huge, delicious, tomatoes. He retired from VA Tech after a thirty year career in the Agronomy Extension Department. He worked primarily with research on grains, soybeans and peanuts throughout Virginia. Bill was a charter member of Northside Presbyterian Church, Blacksburg and later transferred his membership to Unity Christian Church, Radford. Visitation will be at McCoy Funeral Home on December 18, 2021 at 1:00 pm one hour prior to the memorial service. A celebration of Bill’s life will be held at McCoy Funeral Home on December 18, 2021 at 2:00 pm officiated by Pastor Wendy Wilson, Unity Christian Church, Radford. Interment will be at Westview Cemetery immediately after the service. At other times, the family will receive friends and relatives at the home of Gary and Sally Davis. A special thanks to Gary and Sally for their love and care for Dad over the years, especially after Mom died. Also, the family wishes to acknowledge and express their gratitude for the compassion and outstanding care provided by the administration and staff of both Commonwealth Senior Living in Radford and Good Samaritan Hospice. In lieu of flowers, please consider a contribution to the Helen Frances Stanger Davis Scholarship, Radford High School, 50 Dalton Dr., Radford, Va. 24141 or Unity Christian Church, Community Table, 400 Tyler Ave., Radford, Va. 24141.

The family of Edward Ribble (Bill) Davis, Jr. created this Life Tributes page to make it easy to share your memories.

Send flowers to the Davis, family.