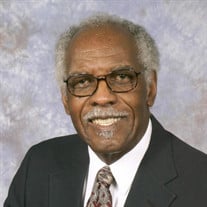 Dr. Rube Harrington, Jr., devoted follower of Jesus Christ, accomplished professional, and dedicated family man died on February 26, 2021 in his 89th year. Rube was born on April 27, 1931 to wonderful parents, Susie (Short) and Rube Harrington in Mashulaville, Mississippi. Rube Jr. was the second son of six siblings. The close-knit family moved around various parts of central Mississippi, until they settled in Louisville. Rube’s mother was a schoolteacher and he received his secondary education at the Winston County Training School in Louisville, Mississippi, where he graduated in 1948. Next, he matriculated at Alcorn College where he received a Bachelor of Science degree in agriculture education in 1952. After graduation, Rube honorably served in the United States Air Force (USAF) for four years. Toward the end of his USAF service, he married his high school sweetheart, Lonia M. Johnson, on September 17, 1955 in East Moline, Illinois. Together, they moved to Tuskegee, Alabama, where Rube was enrolled in the veterinary medicine program. Their first son, Reginald Jerome, was born there. After receiving his doctorate in veterinary medicine in May of 1961, Rube and his young family set out for Fremont, Nebraska. There he worked as a division area veterinarian for the United States Department of Agriculture (USDA). While in Fremont, Rube and Lonia’s second son, Kermith Vernard, was born. For two years, Rube was a Research Fellow at the Mayo Clinic in Rochester, Minnesota. From there, the family moved to St. Paul, Minnesota, where Rube received his Master of Public Health from the University of Minnesota. In 1967, Rube accepted a position in the diagnostic bacteriology unit of the National Veterinary Services Laboratories (NVSL) in Ames, Iowa. Breaking down racial barriers and stereotypes, Rube rose through the ranks of the laboratories during an almost 20-year stay, eventually becoming NVSL director in 1984. He soon became Western Region Director of USDA Veterinary Services which included a move to Englewood, Colorado. After a reorganization of Veterinary Services in 1988, Rube’s office was moved to Arlington, Texas where he stayed until his retirement in 2002. After retirement, Rube and Lonia made their final move to Blacksburg, Virginia to be near their son, Vernard. Throughout their 50+ years together, Rube and Lonia were faithful and active members of many church communities. Because of their incredible faithfulness, when visiting their home, on most days, you could find them diligently reading or listening to the Bible while discussing Sunday School lessons or study guides. Rube believed "to whom much is given-much is required." He never faltered in giving his time, talents, or tithes. He was also generous in giving back through charities and various organizations such as his alma mater, Tuskegee University. A endowed scholarship is funded by Rube there.  Rube LOVED music! He was especially fond of singing. He had a beautiful base voice and sang in various groups all through high school and college. He continued singing with church choirs until his health declined and he was no longer able to attend church services at Blacksburg Baptist Church. Even when memory loss became severe and he could no longer remember the words, you would find him continually humming a tune. Rube was also fond of advising everyone who “needed it” on how to live with diabetes or to simply live a healthy life. Likewise, he never hesitated to advise “workaholics” about the importance of separating yourself from work and connecting with family. In sum, Rube’s life was well lived. His secrets to a long and happy life were unyielding faith, loving family, disciplined wellness practices, and never-ending gratitude. Rube was preceded in death by his talented wife, Lonia (2005) and his son Reginald (2001). He is survived by his son Kermith Vernard, two daughters-in-law (Wanda and Tara), four grandchildren (Gale, Giovonni, Marquise and Mallory), two great grandchildren (DeShawn and Jamari), and three sisters (Ermina Peyton of Laurel, Mississippi, Lillie Edwards of Chicago, Illinois, and Geraldine Page of Roanoke, Virginia). In lieu of flowers, the family asks you to consider a contribution in memory of Dr. Rube Harrington to a Historically Black College and University (HBCU), such as Tuskegee University. Gifts can be sent to: https://www.tuskegee.edu/support-tu/give. The family would like to give special thanks to the staff of the Showalter Center of Warm Hearth for Rube’s compassionate care. While he was quick to point out opportunities for improving diabetic care procedures when he thought it was necessary, he would brag without reservation about the nursing staff, housekeeping, food services and especially the administrative staff. He was also quick to say, “I love this place! I don’t know why I didn’t move here earlier”. Due to Covid protocols, services will be private. The McCoy Funeral Home, 150 Country Club Drive SW, Blacksburg, VA 24060 is assisting Dr. Harrington’s family with his final arrangements. If you wish, you may post tributes on their website: https://www.mccoyfuneralhome.com/obituaries/.

The family of Dr. Rube Harrington Jr. created this Life Tributes page to make it easy to share your memories.

Send flowers to the Harrington family.