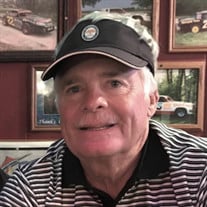 Doyle “John” Livasy, Jr., affectionately called “Diddy” by his four grandchildren, went home to be with the Lord on August 1, 2020 in Murrell's Inlet, SC after the onset of Hamman-Rich Syndrome. He was born August 24, 1949 in Fort Dodge, IA to Doyle John and Ora Belle "Bea" (Gehrt) Livasy. He graduated from Fort Dodge Senior High School in 1967, received a BS in Industrial Engineering from Iowa State University in 1972, and an MBA from Averett University in Danville, VA in 1996.   On October 6, 1973 John and Donna L. Kuske were married at St. Paul's Lutheran Church in Fort Dodge, and began their married life which consisted of many moves to several states: Port Clinton, OH;  Christiansburg, VA; Greenwood, IN; Hendersonville, TN; Blacksburg, VA; and Fairborn, OH. He was an Industrial Engineer for US Gypsum, Federal Mogul, Hubble Lighting, Datacard, and retired as a Purchasing Manager for Vernay Laboratories. While moving was the norm in manufacturing, he refused to move once his kids established lifelong friends in Blacksburg, VA. At one point, he chose to commute to a new job ninety minutes each way so they could finish high school in their "hometown." Summer vacations were important to him, taking two weeks off many summers to travel and explore the country together as a family.  In 2003, John and Donna settled in Conway, SC, where he enjoyed his passion for golf, the beach, traveling and living on the east coast near their children and grandchildren. They looked forward to visits from friends and relatives and never missed a family birthday celebration. John and Donna attended most Virginia Tech football games at home in Blacksburg, VA and loved tailgating and traveling for bowl games. John especially cherished family and high school classmate reunions in Iowa and travel to see Donna's family in CA and at White Hole, AR where they loved fishing, golfing, boating and kayaking. He was thoughtful, supportive, and had a great sense of humor. John would help with endless house projects, play jokes on us, wrestle with the grandchildren, get his hair styled by his granddaughter, convince the grandchildren he was The President of the Universe, and took his timeouts in stride. He knew to be wary of "Mr. Lizard." He was quite the character who will be dearly missed and always remembered for his warm smile   John is survived by his wife Donna; daughter Kristany and son-in-law Brian Fones, granddaughter Kyleigh and grandson Levi of Midlothian, VA, son Jeff and daughter-in-law Kristina (Boardman) Livasy and grandsons Grayson and Luke of Mount Pleasant, SC; siblings Vernon (Judy) Livasy of Fremont, Nebraska, and Bob (Pam) Livasy of Spencer, Iowa; as well as Aunt Doris Landmesser and Aunt Esther (Dick) Jergens of Gilmore City, IA. He is also survived by brothers-in-law Steve (Kay) Kuske of Des Moines IA and Charles Kuske of Brooklyn, NY; sisters-in-law Nancy (Dennis) Crandall of Fort Dodge, IA and Debbie (Kuske) Severson of Phoenix, AZ and by numerous beloved cousins, nieces, nephews and their families. He was preceded in death by his grandparents, his parents, and his brother Jeffrey Dale Livasy in 1973 John will be interred at Memorial Gardens of the New River Valley in Blacksburg, Virginia after a private memorial service for immediate family. A Celebration of Life will be planned when Covid related restrictions are lifted. Please click the link below to view a video tribute to John. https://youtu.be/-n1hkfhZiBw   In lieu of flowers, please consider a donation in John's memory to The First Tee of Coastal Carolinas https://www.firstteecoastalcarolinas.org/memorials/ The First Tee is an educational youth program that builds character and instills values through the game of golf. Arrangements by McCoy Funeral Home of Blacksburg, VA.

The family of Doyle "John" Livasy Jr. created this Life Tributes page to make it easy to share your memories.

Send flowers to the Livasy family.