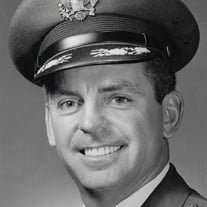 An American Hero , a Hall of Fame College football player, a decorated Air Force bomber pilot in World War II and Korea, a trusted advisor to 2 Presidential Cabinets , a pioneer in the formation of Communication Satellite Corporation, a scratch golfer, a devoted husband, a loving father grandfather and great grandfather- what a life Don Greer lived!! On Thursday May 28th in Blacksburg, Virginia the storybook life of Colonel (retired) Donald Edward Greer ended (age 96) surrounded by family and in the arms of his cherished devoted caregiver daughter Heather Nelson. Don was born in 1924 in Rock Island, Washington to Nellie and Fred Greer as the second of 7 children. Preceding him in death along with his parents were his older brother Herb and his younger siblings Shirley, Frank and Darlene. He leaves his brother Harry and sister Dallas to share memories of childhood antics, hunting trips, deer sightings, fish stories and laughter from their ongoing conversations. With Washington state as the launching pad, there are few points in the world Don did not explore. He graduated from the University of Pacific where he also received his Master of Business Administration. His prized treasure from U of P however was the love of his life Loretta Walker from Stockton. Don and Loretta married in the college chapel and went on their life journey together until her death in 2013, enjoying 64 years of marriage. His second greatest accomplishment at U of P was as a football star participating in the Raisin Bowl. Don played under the direction of Amos Alonzo Stagg and alongside future NFL pro Eddie LeBaron. Don’s team was inducted into the U of P Hall of Fame in 2006. Don was a veteran of WWII where he flew B-29’s from the Marianas. During the Korean Conflict he and his brother Herb were the only members of a family flying combat mission on the same crew, having completed 33 missions and more than 300 flying hours together. As a command pilot he flew the latest jet aircraft of the Strategic Air Command. He also had the honor of flying President Lyndon Johnson on Air Force 1. Don and Loretta moved from California to Oklahoma to Virginia to Georgia and back to Virginia and they embraced each location. Career wise if Don wasn’t flying over it while protecting the US in the world, he visited it in his illustrious career. Don was stationed at the Pentagon where he became the attaché for Eugene M. Zuckert, President John Kennedy’s appointee as Secretary of the Air Force. General Zuckert is credited with directing the Air Force’s investigation of technologies into future aerospace military operations. Don served as the liaison between the office of the Secretary and the U.S. Congress. While working under General Zuckert’ s leadership Don caught the eye of Joseph Charyk. In “the great Space race” against Russia declared by President Kennedy, Dr Charyk was appointed as the first president of Communications Satellite Corporation. Dr. Charyk made geosynchronous satellites the basis of the Comsat network and he knew he needed a capable manager with a skillset unparalleled in industry. He lured Don away from the Air Force one promotion short of General to be his right-hand man at Comsat.  As Vice President of Executive Services, Don provided Dr Charyk and the Board of Directors logistical support for all activities which included raising funds to support this new industry and enlisting the cooperation of countries around the world. Their efforts launched a global system that today is commonplace to billions of people around the world. Don worked at Comsat, with Dr. Charyk from 1964 to 1985. Their friendship grew as they traveled the world establishing satellite systems with the occasional stop along the way to participate in numerous hunting and fishing excursions and of course golf tournaments. Golf venues for the duo included the Hawaiian Open, The Greater Hartford Open and The Kemper Open playing alongside the likes of Sammy Davis Jr, in addition to a multitude of golfing Professionals. Don’s ability on the course made him a “first pick” favorite for many member -guest tournaments which produced a crowded trophy case in his house. Don lived his final years in Blacksburg VA where he became a Hokie fan watching four of his grand children attend his daughter Heather’s alma mater, Virginia Tech. Along with Heather and her husband Wally of Blacksburg, Don is also survived by his daughter Rhonda Falk and her husband Mike of Flower Mound, Texas. Don loved supporting Rhonda in her avid love of horses. He is also survived by his grandchildren and their spouses who made him immensely proud. Grandchildren include Brett Bourgeois (spouse Justin), Crandall Murphy (spouse Shannon), Jay Nelson (spouse Tory), Krysti Nelson (fiancé Ryan), TJ Bourgeois and Katherine Nelson. His great grandchildren include Jackson Nelson, Addy Delgado- Bourgeois, and Paige Nelson. Funeral services will be a private family military service and interment will be in Blacksburg. The family would like to thank the wonderful management and staff at English Meadows of Blacksburg for their love and support of Don over the last few years while residing in their care, as well as thank his caring physicians Dr. Beato, Dr. Johnson, Dr. Kelleher and his Home Instead caregivers. Don lived his life for others, his Country, his wife, his family and his God. His work here is done as his eternal life begins. “ The day which we fear as our last day is but the Birthday of Eternity” …. Emily Dickenson In lieu of flowers, kindly send donations to the charity of your choice.

An American Hero , a Hall of Fame College football player, a decorated Air Force bomber pilot in World War II and Korea, a trusted advisor to 2 Presidential Cabinets , a pioneer in the formation of Communication Satellite Corporation, a scratch... View Obituary & Service Information

The family of Donald Edward Greer created this Life Tributes page to make it easy to share your memories.

An American Hero , a Hall of Fame College football player, a...

Send flowers to the Greer family.