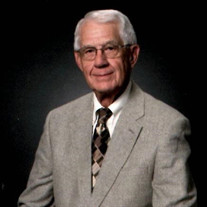 Dennis August Hartman passed away June 4, 2020, at the age of 89, in Blacksburg, VA, where he had resided with his wife Anne, for 42 years. He was born in Florence, Missouri, May 3rd, 1931 to August and Nora Hartman. He grew up on the family farm along with his two sisters, Leona and Doreen. The Hartman farm was involved in crop farming as well as dairy and egg production. Dennis developed an understanding of dairy cattle, milk production, feed and care early on in his life that eventually became the core of his life’s work – animal husbandry, specializing in dairy science. He showed dairy cattle at local and state fairs, winning Champion Junior Showman at the 1949 Missouri State Fair when he was 18. Another showman award granted him a trip to Ontario, Canada to attend the Royal Winter Fair. Dennis graduated from Stover High School in 1949 and then attended the University of Missouri, where he received both a Bachelor of Science and a Masters degree. He was a member of the Alpha Gamma Rho fraternity. In between his studies at Mizzou he served in the US Army during the Korean War. He earned his PHD in Animal Science from Ohio State University. Dennis met the love of his life one summer day at the Lake of the Ozarks. Anne had a summer job working in a gift shop, when Dennis walked in with some of his buddies. As the story goes, Dennis took one look at Anne and remarked to his friend, “I’m going to marry that girl”! And marry they did! Anne Chamberlin and Dennis Hartman were married June 30th 1956, at the First Baptist Church in Carrollton, Missouri. This June would have been their 64th wedding anniversary. In 1956 Dennis joined the faculty of Cornell University as a professor of Animal Science, a position that he held for 21 years. He enjoyed teaching and working with students and served as a State 4-H Dairy Specialist. He successfully coached students on 4-H judging teams, winning the national championship award 3 times. Winning the nationals in the late 1960’s included an extended trip throughout Europe for the entire team. Dennis and Anne chaperoned the trip as the team boarded a VW bus and drove to visit dairy farms and capital cities from England to Germany, France, Belgium and Scotland. He enjoyed judging dairy cattle shows, throughout his career he judged shows at most northeastern and southeastern state fairs as well as several international fairs. He was a prolific writer and publisher of educational dairy research and a contributing columnist for several monthly dairy science publications. He served as a visiting professor at the University of Florida and the University of Missouri. Dennis had a way with animals, including dogs. He taught dog obedience classes for many dog lovers who needed instruction training their dogs. At the completion of the program all the dogs were shown by their owners in a graduation show competition, with an award ribbon ceremony. He designed an upscale, but utilitarian outdoor dog house that was widely praised, with plans available to the public, published by Cornell University press. Music and guitar playing were some of his favorite forms of expression. While at Cornell he created a small musical group consisting of a professor of sheep, a professor of hogs and himself, a professor of cows, thus the group’s name,” The Bull, Ram, Bores”. They played at various faculty functions and some awards ceremonies, providing music, and humor. Dennis and Anne’s two sons were born in Ithaca, Mark August and Douglas Milton .They enjoyed bringing up their family in Ithaca and sharing many happy times with their Cornell faculty friends and families. In 1978 Dennis and Anne decided to make a move to a warmer climate and moved to Blacksburg, VA. Dennis continued his career in the collegiate world and joined the faculty at Virginia Tech as a Professor of Dairy Science, a position that he held for 16 years. Dennis had many life-long hobbies and interests that included fishing, which began when he was a boy fishing in the Florence creek near the family farm to fishing in the New River and Smith Mountain Lake in Virginia and Lemon Bay in Florida. He loved playing golf and was a member of the Cornell and VA Tech golf courses as well golf leagues that held annual competitions, one of which he won for the high scoring senior player. Quail and pheasant hunting was another passion that allowed him to enjoy nature, and to watch his bird dogs working the fields on the scent of a quail or pheasant. Growing roses became a huge interest later in his life, resulting in his growing and tending more than 50 rose bushes and showing his roses at the Roanoke Rose Society exhibitions. He was an avid fan of both basketball and football, especially on the collegiate level. Dennis and Anne enjoyed stays at their Smith Mountain Lake house and winters at their condo in Englewood, FL. They both loved to travel and made many memorable trips both domestically and internationally. Dennis had a strong Christian faith and love for our Lord. He was a member of the First Baptist Church in Blacksburg where he served as a deacon and attended Fidelas Sunday school. He was also a member of the Blacksburg Lions Club. He dearly loved his wife Anne. They happily shared the majority of their rich and blessed lives together on earth, now they are together again in Heaven. Anne passed away just 2 months ago proceeding Dennis. Survivors include eldest son Mark and his wife Linda, their two children Matthew and Lauren, and great grandson, August, son of Matthew and his wife Kimberly; Douglas and his partner, Michael. Nephews Mick and Phillip Selken, children to his eldest sister, Leona and her husband Paul, both deceased, and Mick’s children Eric and Sarah. Nephew Andrew and niece Anne McRoberts, children to his sister Doreen and husband A.J., “Mac”, both deceased, and Andy and his wife Melissa’s son Jack.

Dennis August Hartman passed away June 4, 2020, at the age of 89, in Blacksburg, VA, where he had resided with his wife Anne, for 42 years. He was born in Florence, Missouri, May 3rd, 1931 to August and Nora Hartman. He grew up on the family... View Obituary & Service Information

The family of Dennis August Hartman created this Life Tributes page to make it easy to share your memories.

Send flowers to the Hartman family.