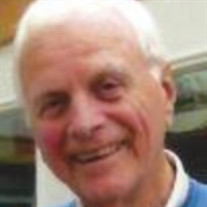 Charles Webster Coale, Jr. of Blacksburg, passed onto glory February 13, 2021. He was born on October 3, 1935. Most people knew him as Charlie. He never knew a stranger, was always a friend, and always wanting to help. He served as an excellent role model to all and made a forever impact on our lives. His passion was his family, friends, and work. He was preceded by Ellen, his loving wife, of 60 years and his brother, Richard M. Coale. He is survived by his children, grandchildren, and relatives as listed. Marjorie (daughter) and Tommy Lawson and children, Thomas, Zachariah, Jeremiah, and Rachel; Roger (son) and Melissa Coale and children, Carson and Taylor; and James (son) and Meaghan Coale and children Jacob and Katie; Cynthia and J. C. Raffety, and their daughter, Jennifer Moss, children Lindsay and Mallory, and son, Robert and Colleen Raffety. He also has extended family in Hartford County Maryland. Charlie was born to Charles Webster Coale, Sr. and Marian Phillips Coale in a farmhouse near Cooptown, Maryland. He was determined to get a great education. He even walked a mile and a half to catch the school bus each day to go to Jarrettsville Elementary School, and then to North Harford High School. While at North Harford High School, he was a 4-H'er and won a trip to the National 4-H competition. This is where he found his passion for a career in agriculture. With his gift of planning and organization, he received a BS in Agriculture Education and a MS in Agriculture Economics from the University of Maryland. After serving in the US Navy, he then returned to Penn State to earn his PhD in Agriculture Economics. In 1959, a weekend after he was married, Charlie served as a Lieutenant in the US Navy aboard the USS Conway, DDE5507, from 1959-1962, during the Bay of Pigs. He was second in command in the beach jumper unit in Little Creek, VA, during critical times. He loved his Conway Reunions, even taking on the role of President. In addition, he reconnected with his ancestry by joining and proudly serving in the Sons of The American Revolution, serving as President once again. He loved the USA and appreciated all that serve. In 1969, Charlie began his 33 year career with Virginia Tech, with a majority of those years serving as a Full Professor. He enjoyed serving many industries - Agra Business Corps in Virginia and the Mid-Atlantic states, Seafood Industry, Food Science, Farm Supply Industry, Farm Equipment Industry, & even as far away as Haiti. In addition, he loved working with graduate students in marketing and research. He served on numerous committees, programs, and was the president and chair of several various groups. He greatly appreciated each person. Charlie loved the Lord and joyfully served at Blacksburg United Methodist Church in many capacities. He was Chairman of the Board, served on the finance committee, utilized his strategic planning skills to help the church reach many people locally and abroad, enjoyed helping kids of all ages through VBS & Adopt A College Student. He cared for as many people as he could with his wife Ellen by sharing his time, talents, and finances. He loved the church & it’s people. A life cannot be expressed by the mere words on a page. It’s expressed by how many lives were touched. Charlie’s reach was far and wide. We cannot possibly list all the impact he had on this world. His focus was always on relationships and how to help others. Charlie and Ellen set up endowment funds to help with the education needs of those not in his family at University of Maryland, Penn State and Virginia Tech. His legacy will on through his children and grandchildren with integrity and generosity and to serve others. Charlie will be greatly missed, and we are grateful and thankful for the time we had with him. His favorite passage was Psalm 23. Donations in lieu of flowers can be given to Blacksburg United Methodist Church A private service will be held at McCoy Funeral Home, Blacksburg.

Charles Webster Coale, Jr. of Blacksburg, passed onto glory February 13, 2021. He was born on October 3, 1935. Most people knew him as Charlie. He never knew a stranger, was always a friend, and always wanting to help. He served as an excellent... View Obituary & Service Information

The family of Charles Webster Coale Jr. created this Life Tributes page to make it easy to share your memories.

Send flowers to the Coale family.