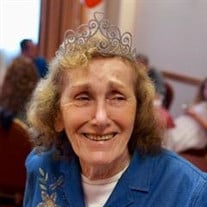 BLACKSBURG, VA — Betty Mitchel Healy passed away Monday, December 21, 2020 in Blacksburg at the home of her daughter and son-in-law, Barbara and Joseph Cox. She was 95 years old. Betty was born in Cincinnati, Ohio, May 22, 1925. She was the youngest and last surving of five children born to Alfred J and Mary (Hermanson) Mitchel. She married George S. Yagerman in 1946 and they had three children. After George died in 1962, she married Andrew T. Healy in 1967. Andrew died in 1995. Betty graduated from Walnut Hills High School, Cincinnati, in 1943. Since she attended high school during an historic time, she recently was asked to donate her year book to the Holocaust Museum to become part of a special exhibition documenting American life during World War II. In 1963 following the death of her first husband, Betty began working at the Federal Aviation Administration (FAA) Miami Flight Service Station. She managed to raise her three children while working alternating day and night shifts providing weather and other vital data to flight crews. She continued to work for the FAA for about 25 years until her retirement. As she did everywhere, Betty established lasting bonds with her co-workers. People who helped care for Betty during her later years described her as “feisty,“ "spunky and smart and a beautiful woman.” This is an opinion that was held by all who knew her. Betty loved keeping in touch with friends and family as a mentor and muse, never lacking for offering advice and encouragement. She also loved feeding the birds and watching the deer, rabbits, chipmunks and other wildlife in her back yard. She adopted a feral, outside cat, whom she called Izzy. Many people felt similarly nourished and protected by Betty! While apolitical in her younger years, she became an avid follower of national goverment and political news as she aged. She enoyed talking about current events, developed clear opinions, and was always perplexed when others did not share her views. In addition to her daughter, Barbara, she is survived by two sons, Daniel E. Yagerman, of Tamarac, Fl, and Steven J. Yagerman, of New York City: daughter-in-law Katherine L. Simmons of Indianapolis, IN; granddaughters: Rebecca Yagerman Deming and her husband Eric Deming, St. Petersburg, Fl; Joanna Yagerman, Brooklyn, NY and Sarah Yagerman and her husband Durham Finney and their three year old daughter, Fiona, New York, NY; and Elizabeth Condon, Charleston, SC; grandson, Justin G. Yagerman, Miami, FL; She also is survived by several step grandchildren, and numerous nieces and nephews. All of them felt a special connection to Grandma (Aunt) Betty! Betty's family would like to express their sincere gratitude for the loving care she received during her final days. They are especially grateful for the support from Good Samaritan Hospice, Warm Hearth at Home, and the medical staff at Lewis Gale Montgomery Regional Hospital. Betty will be interred along with her late husband, Andrew T. Healy Jr., at Spring Grove Cemetery, Cincinnati, OH. A memorial service will be planned at the Spring Grove Cemetery at a future date when health concerns permit travel and gatherings. In lieu of flowers, the family asks that donations to Good Samaritan Hospice, Roanoke, VA. be considered.

BLACKSBURG, VA &#8212; Betty Mitchel Healy passed away Monday, December 21, 2020 in Blacksburg at the home of her daughter and son-in-law, Barbara and Joseph Cox. She was 95 years old. Betty was born in Cincinnati, Ohio, May 22, 1925. She... View Obituary & Service Information

The family of Betty Mitchel Healy created this Life Tributes page to make it easy to share your memories.

Send flowers to the Healy family.